Those of you using Red Gate's excellent SQL Test product to have unit testing integrated within SSMS may be aware that it uses the tSQLt framework internally.

The tSQLt framework is open source and updates quite frequently, often adding new features. I have sometimes found myself needing a newly released feature, but been unable to get it from SQL Test, when Red Gate haven't yet adopted the updated version. However, there is a way that you can upgrade the version of tSQLt that a database uses, and still use the integration from SQL Test. It can be source controlled in the same way and allows you to adopt the latest version; you can also use this method to downgrade if you need to.

In this post I'm going to show you how to do it.

Firstly, let's establish what version of tSQLt you have installed. I'm going to use the example database installed by SQL Test for this post. If you haven't installed the sample, you can do this by clicking the button at the bottom of the SQL Test window (you may need to scroll down if you have a number of databases with tests in them):

This will bring up the window which allows you to add a database to SQL Test - at the bottom of which is a link to "Install Sample Database". This installs a database called tSQLt_Example.

We can see the installed version with the tSQLt.Info() function:

However, what if we want to use the new AssertLike function? It was only released in the latest version (1.0.4735.30771), so if we try to get the OBJECT_ID of 'tSQLt.AssertLike' we will get a null result.

We need to download the latest version of tSQLt, which you can get here. It downloads as a zip file, which contains three SQL script files:


So - open up the tSQLt.class.sql file in SQL Management Studio, and run it from your existing tSQLt-enabled database. This will re-register the latest version of the CLR for tSQLt, and install the new procedures.

We can now see the version of tSQLt has been upgraded, and that we have the tSQLt.AssertLike stored procedure installed: 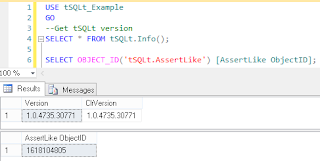 You will find that SQL Test will now use the new version of tSQLt in those databases that you have updated.

Upgrading tSQLt in this way doesn't change the tests you have installed, and there is no problem with running different versions of tSQLt in different databases - this means that you can upgrade projects at different times. If you have source controlled your database, then the new version of tSQLt will be source controlled with your database too, so your tests will still work (including any new tSQLt functionality) for your colleagues and in your CI system.

This  method doesn't change the version that SQL Test will install if you add tests to a database, so if you hit trouble you can simply uninstall tSQLt (using tSQLt.Uninstall) and use SQL Test to re-add the framework to your database; reverting like this shouldn't alter your existing tests, but any that you have written using new functionality would cease to work as expected.
Posted by Dave Green at 17:54